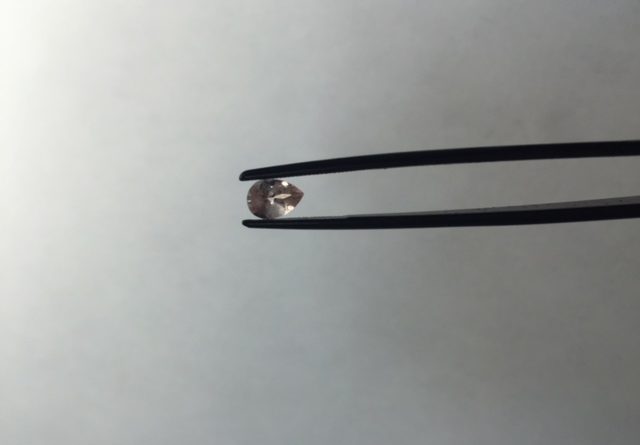 Morganite at a Glance:

Morganite is a gem that is definitely having a moment right now! Trendy and popular as an engagement stone – Morganite is a pink beryl that was discovered in Madagascar is 1911. It was named by Tiffany’s colored gem specialist at that time, George Kunz, in honor of J.P. Morgan, who, besides being an American banker, was a noted gem fan.

Morganite owes its blush color to traces of manganese. Brighter pinks in Morganite are extremely rare, it is usually only larger Morganite gems that show the finest color Morganite has to offer.  Morganite’s color range is from pink, rose, peach and salmon. The most popular Morganite hues currently are pink and rose. Some collectors seem to value untreated peach-colored Morganite the most.

Morganite is nearly almost always heat-treated to improve the pink color. This treatment is considered permanent and cannot be detected. Heating Morganite can eliminate yellow or orange tinges, leaving the valued pink. Once Morganite is heat- treated, the color is stable and will not fade.

Where is Morganite Found?

The majority of Morganite in the industry is found in pegmatite mines in Brazil, Afghanistan, Mozambique or Namibia. Morganite is also found in the United States, in California and Maine, but only in small quantities. The original Madagascar deposit really set the standard for the best color and quality, though today it only produces minor yields. The magenta colored rough from Madagascar has always been superior to all other sources.

Morganite is rarer than aquamarine, but it is not difficult to find large, faceted stones in the marketplace. This is probably due to the fact that Morganite has, in the past, not been marketed as prominently as aquamarine or emerald (although I feel like that is changing – I am seeing a ton of Morganite out there – and it was definitely present at JCK!)

Morganite is a 7.5 to 8 on the Mohs scale, so it is durable, but not as durable as a diamond, ruby or sapphire.  If you are going to place a Morganite in an engagement ring, make sure it has a protective setting, such as a bezel.  Unlike it’s beryl counterpart, emerald, Morganite is usually eye-clean.  Morganites are usually faceted, and cut into such shapes as round, oval, cushion and pear.  It is safe to have your jeweler clean your Morganite with an ultrasonic or steam cleaner, unless you know that your Morganite has fractures or liquid inclusions (Morganites rarely do).   You can also clean your Morganite with warm, soapy water.

I have noticed plenty of Morganite engagement rings lately, on social media and prominently featured in some of my favorite jewelry stores – do you like it as a diamond alternative?

Please let me know your thoughts!

Rent the Runway Review
Middleton Jewelers project complete!
I had my Ellensburg Blue polished by a lapidary!
All About Tanzanite: Interesting Facts and Information