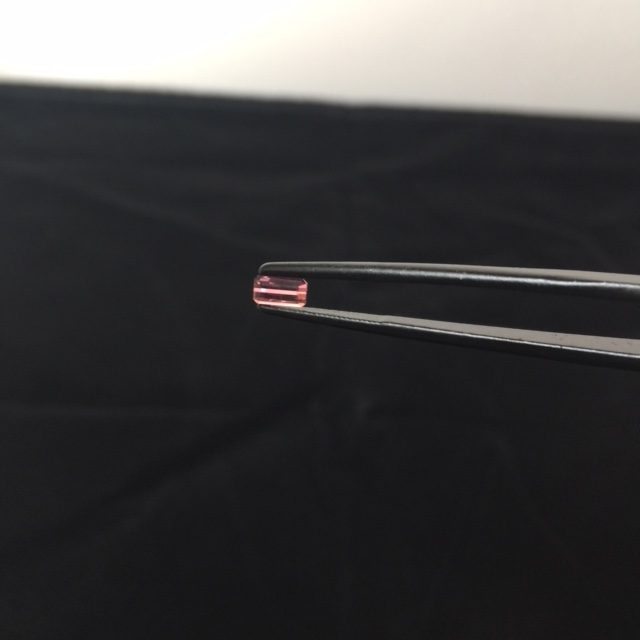 A tourmaline’s color depends on what species it is, and what trace elements it contains.  Iron in tourmaline, and possibly titanium, can make a tourmaline green or blue.  Manganese contributes to a tourmaline being red or pink.  Tourmalines also sometimes have color zoning that can occur when trace element change during the growth of the crystal.  Tourmalines that show more than one color are knows as parti-colored.  If there are two distinct colors showing, it may be referred to as bicolor.  If a tourmaline is red or pink with a green overgrowth, it  is sometimes referred to as a watermelon tourmaline.

Because tourmaline crystals form as an elongated crystal with a rounded triangular cross section.  They are sometimes very large and mostly free of inclusions, so cutters can often fashion very large stones from rough.  Because of this, gems are often cut and fashioned as narrow and non-standard sizes.  Gem buyers usually prefer standard sizes because they are easier to set and sell.

Tourmaline is doubly-refractive.  It also shows pleochroism (it shows different colors from different angles) so cutters have to consider all angles before cutting and polishing.  Inclusions common in Tourmaline include thread-like cavities that run the length of the crystal.  Under magnification they are filled with gas bubbles or liquid.  If there is a large group of inclusions it can show a cat’s-eye.

Where are Tourmalines found?

Tourmalines are found in Brazil in a variety of colors.  Some other places where Tourmaline can be found are the Kenya, Tanzania, Namibia and even the United States.  The most prized color of Tourmaline is known as Paraiba, which was originally only found in the Brazilian state of Pariaba..  Paraiba is a rare neon blue to green variety of Tourmaline that was discovered in 1989.  It is believed that its vibrant color is a result of copper trace elements.  Copper is a coloring agent that is almost never found in tourmaline.

Do you find Tourmaline as intriguing as I do?  Let me know in the comments!