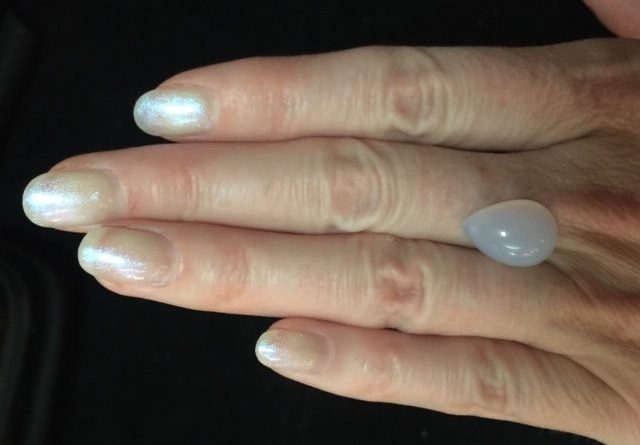 My husband and I have owned a piece of rough Ellensburg Blue for some time. What is Ellensburg Blue, you ask? Ellensburg Blue (also affectionately known as E-blue) is a geode type agate found only near Ellensburg, Washington in a small area near Upper Green Canyon and Reecer Creek. Most of this land is privately owned. It is thought that Ellensburg Blue formed as a result of lava flowing through a layer of basalt, known as Teanaway-basalt. The Teanaway basalt is approximately 47 million years old. The Teanaway basalt had holes in its surface, and when hot lava passed through these holes, the agates were formed. The agates were then carried by river to the valley where they now lie. They are now exceedingly rare, their supply depleted by around 1940.

Ellensburg Blue’s color can range from a very pale sky blue, to a vivid cornflower blue, to a deep blue-violet. It has been deemed the third-rarest gemstone in the world by multiple sources.

Our a2zgemstone E-blue originally weighed 3.1 grams, was irregularly shaped and contained a fair amount of host rock that would need to be removed. The color could best be described as a light cornflower blue.

I contacted Danielle Saudino, a fellow Instagrammer who is also a jewelry designer and gemstone buyer (check her out on Instagram – her designs are inspired) and asked if she had a lapidary she worked with, and she did. I sent it off and I got it back recently. And I am in complete awe. The E-blue lost some weight, as was to be expected, but the results are amazing. The lapidary polished it into a pear-shaped cabochon which now weighs almost 1.6 grams. This will make it easy to set, probably in a pendant. The best part is the color it revealed. It is definitely a light cornflower-blue, but it also shows a pinkish adularescence which changes with your light source. It is a very special stone.

All About Spinel!
The Argyle Mine
Selling antique jewelry to Lang Antiques!
JCK 2021 - Here's Who I Look Forward To Seeing Next Year