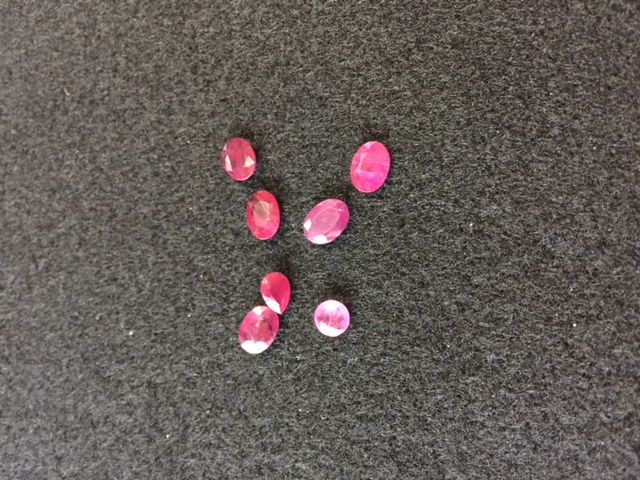 Ruby is the red variety of corundum.  It gets its color from chromium.  Ruby gets its name from the Latin ruber, which means red.

Ruby is considered one of the “Big three” gemstones in terms of value after diamond, along with Emerald and Blue Sapphire. Color is considered Ruby’s most important virtue. Ruby’s most valuable color is called pigeon blood.  Pigeon blood rubies command higher prices over other Rubies with lesser color.  Clarity is Ruby’s next most important quality:  a stone with few inclusions will command a much higher price than one with inclusions.  All natural Rubies will have imperfections in them, the most common being rutile needles, which are commonly known as “silk”.  These inclusions are important however: gemologists are able to easily authenticate Rubies that contain rutile needles.  Nearly all natural Rubies will also have color impurities.

Rubies can also show a phenomenon know as asterism, which can form a “star”.  The most common form of asterism is a six-point star.  Rubies that show this phenomenon are almost always cut into a cabochon (a form of cutting that is polished into a dome shape, but not faceted) to best show the star.  This type of inclusion can raise the value of a Ruby.  There are also Rubies that exhibit color change, though these are extremely rare.

Where Rubies are Mined

Over the centuries, Rubies have been mined in Burma, (Myanmar), Thailand, Cambodia, and Madagascar, among many other countries.  Some have been found in the United States in Wyoming, North Carolina, South Carolina and Wyoming, but there have been very few.  The Mogok Valley in Myanmar has historically produced some of the most exceptional Rubies, but very fewer are found there today.

Rubies often receive treatments to enhance their color.  Heat treatment and lead glass filling are two of the most common.  When shopping for Rubies, the jeweler should always disclose any treatments that have been applied to a Ruby.  Untreated Rubies go for top dollar, so even if a jeweler does not mention treatment, you should always assume that a Ruby has been treated.

Ruby as a Birthstone

Ruby is the birthstone for July and is about a 9 on the Mohs scale, which means it is durable enough for everyday wear.  Ruby can command the highest per-carat price of any colored gemstone.

Do you love Rubies as much as I do?  Comment below…